Who and What is Gartner?
Gartner is the world's leading IT research and advisory company. They guide thousands of organisations in the right direction with insights into the technological world. One of the famous tools invented by Gartner is the Hype Cycle.

What is the Hype Cycle?
The Hype Cycle was introduced in 1995, and is used to show the interest or "hype" and resulting disappointment which usually happen after the introduction of a new technology.

The purpose of the Hype cycles is to show how and when technologies move beyond the "hype", which is used by companies to see whether certain technologies are worth investing in and if it’s ready for adoption within the business.

One example of this can be seen with cloud and Big Data. Although many companies have started to embrace the cloud, many companies, particularly small to medium sized business were holding back because of concerns. Security, privacy and legality were the main concerns for organisations moving to cloud (and still is a concern for several businesses). But now that the "Hype" is on the up slope of the Hype Cycle, these concerns are fading away while more and more businesses jump on the cloud bandwagon.
So, what is the Gartner Hype Cycle? To sum up, it is a graphic representation of the maturity, adoption and social application of specific technologies. There are five phases in the cycle represented in this graph: 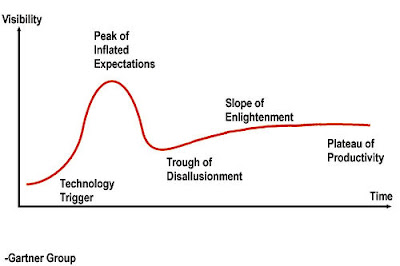 1.   Technology Trigger: the first phase is the breakthrough or product launch which causes significant press and interest.

2.   Peak of Inflated Expectations: the next phase is the publicity which generates ‘hype’ or further interest.

3.   Trough of Disillusionment: This phase is when the technology fails to meet expectations and can quickly become unfashionable. Because of this, the press would usually abandon the topic.

4.   Slope of Enlightenment: In this section, you start to see that some businesses continue to use the technology and discover further benefits and practical applications.

5.   Plateau of Productivity: Once the technology reaches this final phase, the benefits of it become widely demonstrated and accepted. It becomes more stable and continues to adapt with more generations.

The latest forecasts of the Hype Cycle show that there will be a the quick adaptation for SaaS (Software as a Service). Gartner predicts that more than 50% of companies will use SaaS applications by 2015. It is also predicted that cloud email is will be used by 10% of organisations, which was a surprising drop since previous hype cycle forecasts, which were close to 20%.
The factors driving the SaaS adoption is the overcoming of IT and budget limitations and the increase in ‘big data’. Big data will have a strong impact within organisations in 2-5 years.
Markets of cloud management business processes are expected to increase annually by 25%. There has been an increase in the interest of cloud solutions for MDM (Master Data Management). The solutions involve the following leading suppliers: Cognizant, Data Scout, IBM, Informatica, Oracle and Orchestra Network.
One of the most notable forecasts is that by 2014, personal cloud is expected to replace the PC as the main data management for a user’s digital life. And an impressive 75% of enterprises surveyed by Gartner are planning to move to cloud computing by 2014.
When is your company planning to move to the cloud? and does your company use the Hype Cycle to decide whether to incorporate a new technology? And if so, which technology was it? Comment below.