The event, designed to discover, provoke and provide insight into an uncertain future shaped by rapid technological advancement, saw Nadella open up about his plans for Microsoft and his views of a mobile-first, cloud-first world where indviduals and businesses are empowered by the devices that they own.

The age of Mobile

With studies indicating that in 2014 the average European household owns 10 digital devices, this truly is the age of mobile. Mobile devices now outnumber people on the planet, even greater in number however are sensors which through the aid of mobile we can now interact with the internet of things.

Speaking of the sensors that surround us, Nadella talked about the emergence of new mobiles services made possible through the power of cloud computing in combination with mobile. Nadella went on to say:

"The only way you are going to be able to orchestrate the mobility of these applications and data is through the cloud... That's why the juxtaposition of cloud infrastructure and mobile experiences is where the world is going."

Take Hive as an example, through the power of mobile you can now control heating from your mobile. Geolocation allows you to turn off the heating when you leave, and turn it on as you are return home. All this enriches your experience whilst also helping to save up to £150 a year.

Today's changing technology industry only respects one thing, innovation. An ideal at the forefront of Nadella's plans for Microsoft. He went on to talk about how to facilitate innovation and change, talking about the the 3 concentric circles for any organisation to continually innovate and succeed. 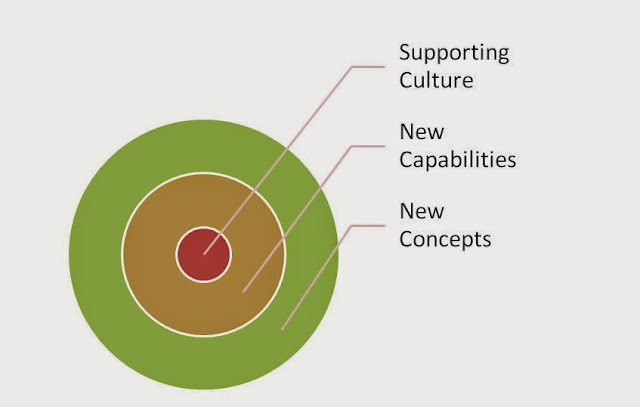 Satya Nadella's first UK appearance was quietly understated. There were no revelations, no new technologies were not announced nor worldwide technological revolution promised. Instead this was an intimate conversation introducing us to the new Microsoft CEO where we learned about his ideals, his motivations and his vision for future technology and Microsoft.
This may have left a few dissapointed, but I along with the masses came away with a valuable insight into the man at the helm of a global technological super power now valued at $400 billion. Did I mention that's bigger than Google Inc.?

As part of Firebrand's global marketing team, Edward actively works to serve the IT community with news, reviews and technical how to guides. Edward is an active member of the IT community contributing to a variety of tech publications including Microsoft TechNet, Channel Pro and PC Advisor.